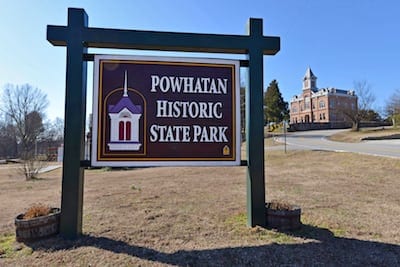 There is something about weaving a basket that takes you back to a simpler time and place. With today’s busy lifestyle, we all need to find a relaxing and enjoyable hobby. Join us at Powhatan Historic State Park and learn to weave a potato basket. This basket has a rich history that has traveled from the east coast across Tennessee with the settlers of Arkansas. All supplies are provided. Please bring a sack lunch. Space is limited. Call (870) 878-6765 or email powhatan@arkansas.com to reserve your space today.

June 22 is the Great American Campout and Arkansas State Parks wants you to get the skills you need to enjoy the natural world! If you’ve ever been unsure how to build a great campfire, let a park interpreter show you how! We’ll cover fire safety, do’s and don’ts, and how to build the best campfire for your environment. We’ll finish it off with campfire cooking 101 and make a tasty treat that you can make at home. #greatoutdoors

Fish like your great-grandfather or great-grandmother! A regular cane pole is a no-frills classic way to fish, much like the earliest settlers of Arkansas did. We’ll fish the banks of the Black River and see what we can catch with our traditional cane poles. Poles and bait are provided first-come-first serve. Fishing license required for anyone over 16. #greatoutdoors

Did your garden go overboard this year? Do you enjoy going to the farmer’s market and want to have some of those fruits and vegetables year round? Join the park staff and learn how to can food so it stays good all year long. We will discuss the history of canning and give some tips for making canning easy. Reservations are required. For questions and reservations, please call (870) 878-6765 or email powhatan@arkansas.com to reserve your space today.

The Lost Animals of Powhatan

Join the park interpreter in the courthouse to learn about the lost animals of Powhatan and early Arkansas. The wildlife we see today is quite different from what the original settlers of Powhatan knew. Learn about the passenger pigeon, red wolf, and other historic species, and what changes have occurred since the 1800s in native wildlife.

Freshwater pearls from the bottom of the Black River have been a large part of our local history, but what do you do with the pearls once their found? Join the staff at Powhatan Historic State Park to make beautiful necklaces, bracelets, or earrings from milky white pearls and learn about the history of the freshwater pearling industry on the Black River. Space is limited; call (870) 878-6765 or email powhatan@arkansas.com to reserve your space today. Note: the pearls used in this workshop were not harvested from the Black River.