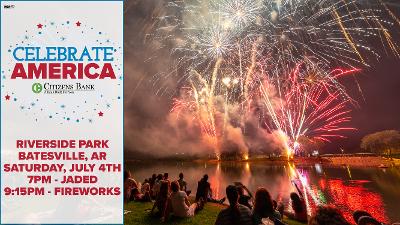 on the Fourth of July in Riverside Park

BATESVILLE – June 11, 2020 – Citizens Bank today announced that “Celebrate America,” its annual celebration of our nation’s independence, will proceed as planned on Saturday, the Fourth of July, along the banks of the White River in Riverside Park in Batesville.

This will be the 23rd consecutive year that Citizens Bank has hosted “Celebrate America,” which is considered one of the most spectacular Independence Day celebrations in Arkansas.  Major co-sponsors for the event again this year are the Batesville Daily Guard and WhiteRiverNow.com

The “Celebrate America” festivities will be topped off at 9:15 p.m. by one of the region’s premier fireworks displays, filling the sky nearly overhead from the staging area in Kennedy Park, located directly across the river from Riverside Park.  The fireworks will be choreographed to music that will be played in the park and also broadcast on radio station KWOZ-FM, 103.3.

“As much as any time in recent years, Citizens Bank believes itis important for everyone to have the opportunity to gather together and commemorate our nation’s independence,” said Micah Beard, Market President for Citizens Bank in North Central Arkansas.  “We and all of our generous sponsors invite you to join us on the Fourth of July to “Celebrate America’.”

The Arkansas Department of Health strongly encourages certain COVID-19 Coronavirus precautions be followed protect the safety and well-being of everyone attending the event.

Due to the virus, food vendors and children’s activities will not be available this year, but families can bring picnic baskets.  Alcohol and glass containers are not allowed in the park.

The Health Department also suggests that everyone wear masks or face coverings to prevent the spread of the infection.  Family groups are advised to sit together, and distance themselves from other family groups by six feet or more.

Visitors should note that the parking lot for Kennedy Park will be closed all day on Saturday, July 4.  As in recent years, a parking area will be provided for trucks with boat trailers.

Citizens Bank was founded in 1953 by business and civic leaders to serve the financial needs of middle-income families and small businesses.  Today, Citizens Bank is a $1 billion financial services organization serving the State of Arkansas.  In 2018, Citizens Bank was named by the American Bankers Association as the best bank in the United States for Community and Economic Development.