The Off the Beaten Path Studio Tour is a free self-guided driving tour of the private working studios of artists located within 30 miles of the courthouse square in Mountain View. The tour, now in its 17th year, will take place on September 14. 15 & 16, 2018. Mark your calendars and make your reservations now! Check out www.yourplaceinthemountains.com and Ivyvacations.net. 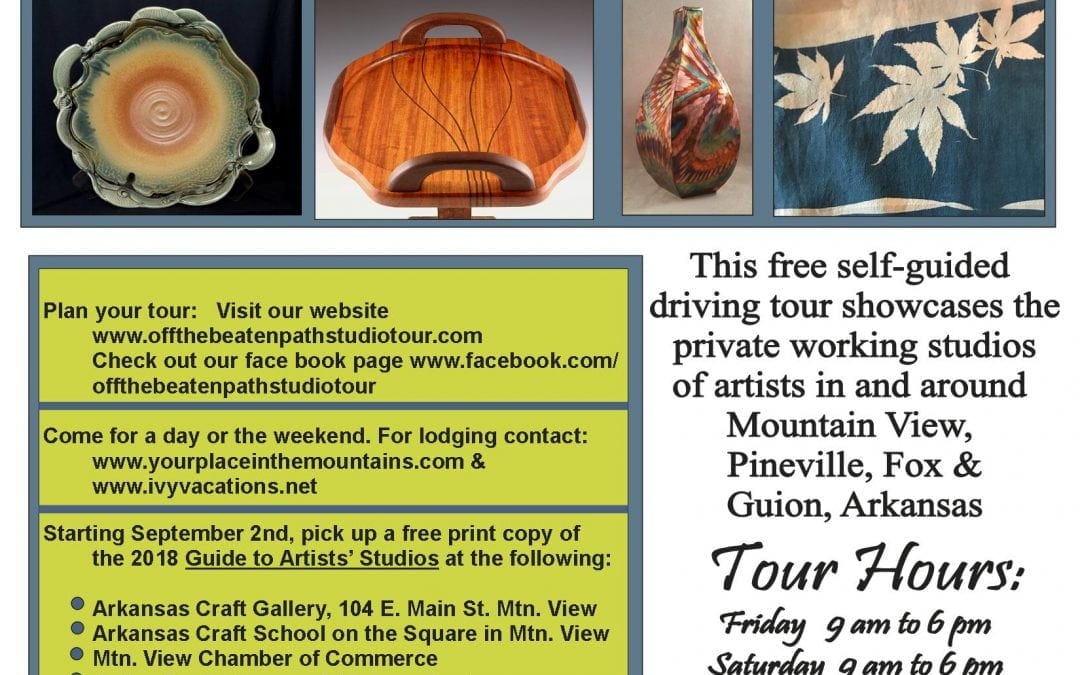 The Off the Beaten Path Studio Tour is a free self-guided driving tour of the private working studios of artists located within 30 miles of the courthouse square in Mountain View. The tour, now in its 17th year, will take place on September 14. 15 & 16, 2018. Mark your calendars and make your reservations now! Check out www.yourplaceinthemountains.com and Ivyvacations.net.
On this special weekend fine artists and craft artisans will open their unique private working studios to the public for an up-close and personal look at how and where they create their distinctive pottery, jewelry, painting, photographs, weaving, wood, furniture, baskets, and much more. Visitors will have the opportunity to visit with the artists, see the work in progress, and purchase locally produced art and crafts directly from the creators.

Studios will be open from 9:00 am to 6:00 pm on Friday and Saturday and from 10:00 am to 4:00 pm on Sunday.
This year the tour welcomes four new artists: Gourd artist Glenda Tooke, Ceramic Jeweler Ann Stout, encaustic painter LaNelle Gambrell, and local historian/author Freda Cruse Hardison.
Shawn Hoefer, broommaker, and Jeanette Larson, weaver, will be returning after a years’ sabbatical. Another artist from earlier tours is rejoining the tour this year – Blacksmith Patrick Thompson. Artists returning from last year’s tour are JP Rosenquist, silver jewelry; Ray Warren, metal work; Doris Fountain, primitive folk art; Judi Munn and John Perry, pottery and painting; Ed and Pam Alexander, photography, garden art and jewelry, Blant Hurt, storyteller and booksmith. Tom and Sage Holland, flame-worked glass beads and sculpture; Lane Berg, painter and mixed media; Linda Rawlings, photographer and printmaker; Loretta Babak, painter; Owen Rein, furniture and baskets; Mahdee and Peggy Raiees-Dana, woodworking and garden art; Russ and Beverly Wilhite, painting; Skip and Rachael Mathews, flame painted copper; Charles and Linda Widmer, wire-wrapped jewelry; Joy Harp, painting, Liz and Lewie Lloyd, wood and knives; Yun Kim, painting; Jim Tindall, painting; David and Becki Dahlstedt, pottery; Paul Gillam Jr. and Paul Gillam Sr., woodworking; Maria Smith, glass bead jewelry; and Joe Bruhin, wood-fired pottery.
A free printed Guide to Artists’ Studios, containing information about the artists along with directions to each studio, will be available beginning September 2nd in the tour area. Pick up your guide at one of the following locations:
In Mountain View: the Arkansas Craft Gallery, the Arkansas Craft School and the Chamber of Commerce office;
In Calico Rock: the Calico Rock Museum and Visitors Center;
In Mountain Home: the Baxter County Library
In Batesville: The Chamber of Commerce. The Independence County Library, 267 E. Main
In Fairfield Bay: the Fairfield Bay Community Center.
To view the book online and to get more details on the 2018 Studio Tour check out the website at www.offthebeatenpathstudiotour.com, and look for Off the Beaten Path Studio Tour on Facebook.
Be sure to join us for a reception for artists, visitors, friends and supporters on Friday evening, September 15th from 7 pm to 9 pm at the Arkansas Craft School on the Square in Mountain View.
For additional information, call Becki Dahlstedt, Tour Coordinator, at 870-615-4825 or email becki.dahlstedt@gmail.com.
Thanks to the Ozark Gateway Tourist Council, The Mountain View Chamber of Commerce, the Stone County Leader and KFFB for their continued support of the Studio Tour.