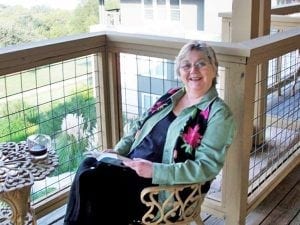 Sit Down With Author Sandy Barnett

Old Independence Regional Museum is offering a delightful time for the public to hear Barnett tell about her writing life and how she came to write her recently published book Dead in the Shadow of Doubt.

The gathering will take place on Sunday, May 6 at 2 p.m. in the museum. Rather than listening to an academic speech, this event will be casual and informative. Barnett may even answer questions about how she incorporated familiar places around Batesville in her book.

For those who recently attended her book signing at The Paper Chase, this will be an opportunity to hear more about how this book came to be. Twyla Wright, curator at the museum, said, “We hope all those who have her book will join us, and for those who don’t we’ll let you know how you can buy one. Of course all who know Sandy will look forward to her humor and story-telling ability.”

Many people in and around Batesville have known her as Sandy Barnett who has been married to Nelson Barnett for a few decades. Or, they may know her as the mother of two daughters who are both teachers. However, she entered the world as Sandra Slaughter. She graduated from Conway High School and four years later completed her BA degree at Hendrix College in Literature and Philosophy.

After her daughters were grown, her love of the written word encouraged her to finish her master’s degree in English with emphasis in Creative Writing at the University of Memphis, and to teach creative writing at Lyon College (where she also managed the Lyon Bookstore).

Barnett has received awards for several pieces she has written. In 1995 she received first place in adult short fiction from Words, an Arkansas literary group in Little Rock) for Reflections in a Cool Case. As a winner, she read at an honoring reception at the Arkansas Arts Center.

Barnett was recently quoted as saying, “For writers truth and fiction are sometimes mirror images. However, the mirror is often one you would find at a carnival Fun House.”

The program will be free and open to the public.  Normal museum hours are: Tuesday-Saturday, 9 a.m. to 5 p.m.  Admission is $5.00 for adults, $3.00 for seniors and $2.00 for children.  The museum is located at 380 South 9th street, between Boswell and Vine Streets in Batesville.