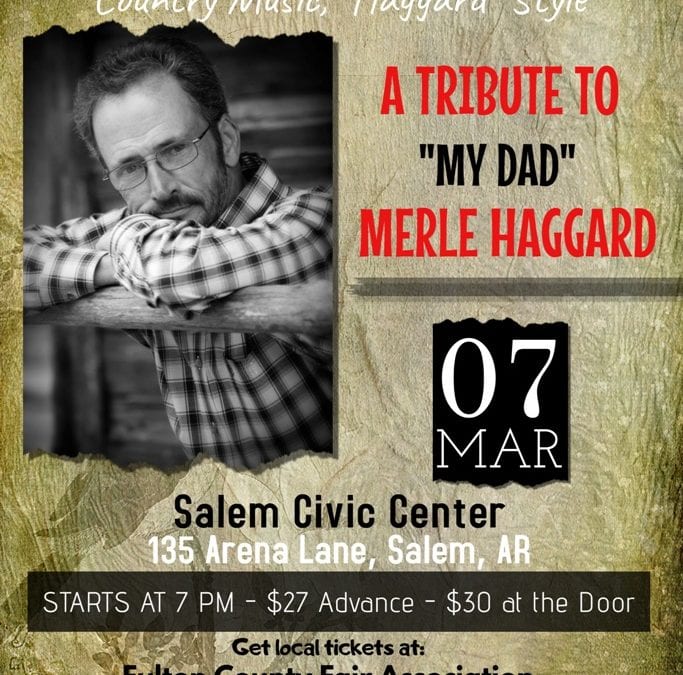 Marty Haggard will bring Country Music “Haggard Style” to the Salem Civic Center in Salem Arkansas on March 7th when he performs “A Tribute to “My Dad” Merle Haggard.” Haggard, the iconic country music singer’s oldest son, will make this a personal experience that’s more of a tribute to a father he loved than a tribute to Merle Haggard. In his father, he sees the greatest singer and songwriter of all time, performing what he views as real country.

When Marty Haggard was young he was his father’s shadow, in the recording studio, on the road and at performances across the U.S. Marty was privileged to be a part of his Dad’s career as a guitar player and backup singer. He had the opportunity to meet many of the country greats as well as other celebrities and dignitaries.

He believed then, as he does now, that the music of his father, Merle Haggard, was as good as music gets. As he grew older, he too became a singer songwriter and earned his own awards in the business, receiving a nomination for best new male vocalist in 1986 for the single, Trains Make Me Lonesome.

But along the way, music changed. The older, country sound his father helped craft stepped aside for progressive, pop-infused beats. The younger Haggard changed too. He loved music but not the music industry. “I never really enjoyed or cared about being a star,” he said in an interview. “Somewhere along the way I grew up and realized I wasn’t enjoying the music business.”

In 1999, Marty began writing and singing spiritual songs. For ten years Marty traveled the country playing at churches and other venues proclaiming his love for Jesus.

However, Marty’s love for his Dad’s music inspired him to begin a project titled “A Tribute to Merle Haggard “My Dad”. In 2010, he cut the first album in his tribute consisting of 15 Hag classics. In 2010 he also began performing a tribute to his dad in Branson, Missouri until 2012.  In 2011 he also recorded his second Tribute album to his Dad. Marty has spent the last eight years performing A Tribute to Merle Haggard “My Dad” all over the United States and Canada plus England, Ireland and Scotland.

I love music and I love him and what I really, really love the most, and this sounds simplistic, is that these people that come to shows grew up with this music like I did. I can see it on their faces, the music is taking these people back to moments of their lives,” Haggard said. “I can see the smiles on their faces and tears in their eyes. This is quite the blessing to help people smile and get away from the ritual of life.

“My dad told me his audiences were getting younger. He’d look out and see young teenagers. These kids got on the internet and stumbled across his music. I think there is a good chance song writing will full circle and come back around,” he said. “Everybody likes good music.”