Main Street Batesville announced over the summer a series of events that promote evening shopping, dining and entertainment and it is called “First Fridays”. 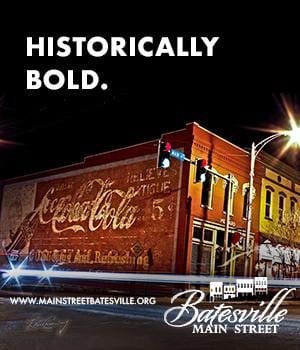 Main Street Batesville announced over the summer a series of events that promote evening shopping, dining and entertainment and it is called “First Fridays”.
Main Street Executive Director Mandi Curtwright wanted to create the event in order to encourage people to shop downtown and more importantly to “have some fun”. 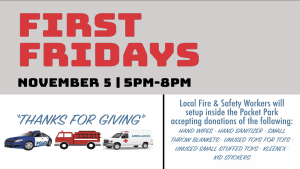 usinesses as well.
Throughout the summer months, the events would open the Citizen’s Bank Pocket Park to free bands for the public to enjoy, and businesses like Stella’s Brick Oven Pizzeria, Main Attire, Sweetie Cakes, Melba Theater, Beneath the Willow, Home Holidays & More, Batesville Area Arts Council, Natural State Running, Gallery 246, Tomahawk Chop Company, Autry’s White River Furniture and Main Street Nutrition would all take part in the event.
Now that fall in the Ozarks has finally hit, First Fridays is ready for “Thanks for Giving” and it’s scheduled for Friday, November 5 from 5:00 p.m. – 8:00 p.m.
According to Stella’s Brick Oven Pizzeria owner Laurie Gottschalk, the Citizens Bank Pocket Park will be full of police, firefighters, nurses, Help and Hope and more to take in donations for this holiday season.
There will be a Batesville Police Patrol Car on hand to show community support. They will also be handing out important information about public safety to visitors.
The Batesville Fire Department will be on hand to potentially give rides on their bucket truck.
White River Health System will have nurses on hand from 5 – 8 p.m. to give out COVID 19 vaccines and information.
Batesville Help and Hope will have a booth set up near the Independence County Library with information regarding their youth outreach program.
Donations they will be accepting include: hand sanitizing wipes, new stuffed toys, hand sanitizer, small throw blankets, kleenex, kids stickers, and new toys for kids. Donations can be dropped off during the event from 5:00 p.m. until 8:00 p.m. inside the Citizens Bank Pocket Park.