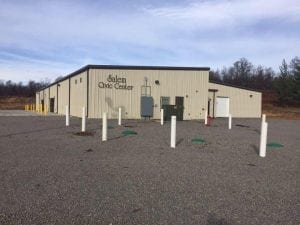 United Country Real Estate Moody Realty in Salem and Cozort Realty of Thayer presents the popular Lockhouse Orchestra in concert on October 28 at the Salem Civic Center located on the Fulton County Fairgrounds in Salem Arkansas. The concert starts at 7:30 p.m and the doors will open at 6:00 p.m. This versatile group played for the inaugural concert at the Civic Center last fall and many have requested that we bring them back for a repeat performance. 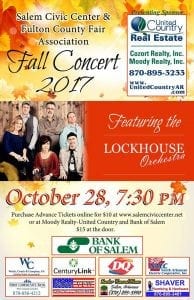 The Lockhouse Orchestra was formed by Danny Dozier to perform a series of monthly concerts. Each month the band would do a tribute to a different artist. Some of the artists covered included The Beatles, The Rolling Stones, Creedence, Fleetwood Mac, Elton John, Eric Clapton, Bonnie Raitt, Sheryl Crow, artists from the Motown era and more. They are one of the most popular groups in the area and are well known for playing a variety of music—southern rock, country, and blues.

The diversity of experience of the musicians is what makes this band special, the members of Lockhouse Orchestera have two very important things in common: the love of music and the love and appreciation of the Ozarks. Each of the members had their own music career before returning home. These musicians’ experience pulls from country, rock, blues, gospel, folk, and heavy metal. The band members include John Parks, Jason Moser and Danny Dozier, all from Batesville. Parks plays guitar and sings, Moser plays drums, and Dozier plays guitar, sings and is the band leader. Sarah Jo Roark of Melbourne sings and plays percussion; Penny Wolfe of Evening Shade sings and plays percussion; and Jerry Bone of Oxford plays bass.

Save on concert tickets by purchasing in advance tickets for $10 each at United Country Moody Realty in Salem or at the Bank of Salem. They can also be purchased at the Fulton County Fair Office or online at www.salemciviccenter.net or www.fultoncountyfair.org. General admission at the door is $15.

Get your tickets before they sell out and save on the day of the concert.