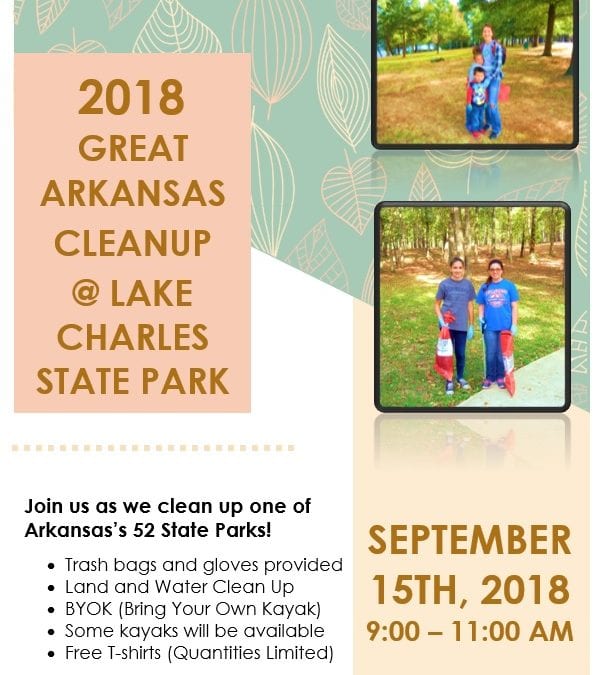 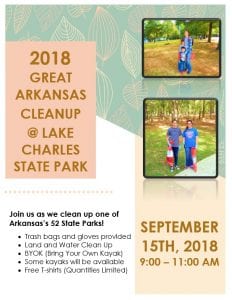 “Litter continues to be a problem at Lake Charles State Park,” said Meghan Moore of Powhatan, local coordinator of this year’s cleanup. “It can leave a negative impact on our community for years to come. By participating in this year’s Great Arkansas Cleanup, local residents can help make Lake Charles State Park a vibrant center of our community.”

Everyone in Northeast Arkansas is encouraged to participate in this year’s litter-pickup effort. Civic and service organizations, church and youth groups, school groups and clubs, scouts, individuals, families, neighborhoods, and businesses can organize cleanup teams and pitch in.

Volunteers will sign-in at the Nature Center where they will be given a T-shirt, trash bag and gloves. Kayaks and life vests will be available to those who would like to aid in the water cleanup effort. Kayakers are encouraged to bring their own kayaks if they would like

“Litter is everyone’s responsibility,” Moore said. “Although not everyone litters, we do all live in this community together and must work together to keep it clean and green. We do this out of community pride to maintain our outstanding quality of life and to improve our local economy.”

About the Great Arkansas Cleanup

The Great Arkansas Cleanup grew out of an effort that began more than 40 years ago as the Greers Ferry Lake and Little Red River Cleanup. In 1985, U.S. Sen. Dale Bumpers guided legislation requiring an annual pickup event during the weekend after Labor Day on all federal lands. This law, the Carl Garner Federal Lands Cleanup Act, honors the founder of the event. Mr. Garner continued his advocacy for a clean and litter-free environment as a member of the Keep Arkansas Beautiful Foundation board of directors until his passing in 2014. KAB organized the first statewide GAC in 1989.

The Keep Arkansas Beautiful Commission (KAB), consisting of a professional staff of three and a nine-member advisory board appointed by the governor, is a division of the Arkansas Department of Parks and Tourism. As a certified state affiliate of Keep America Beautiful Inc., KAB inspires and educates indviduals to reduce litter, recycle and keep Arkansas beautiful. KAB is funded through its 1 percent portion of the eighth-cent Conservation Tax and, by mobilizing volunteers, returns to the state a cost benefit of more than $6 in community service for each program dollar spent. For more information, visit KeepArkansasBeautiful.com or stay connected on Facebook, Twitter, Instagram and YouTube.