Jackson Farms is the destination for you to fall in love, pumpkins, sunflowers, jumping fun, corn maze and much more to enjoy at this family fun spot at Black Rock Arkansas 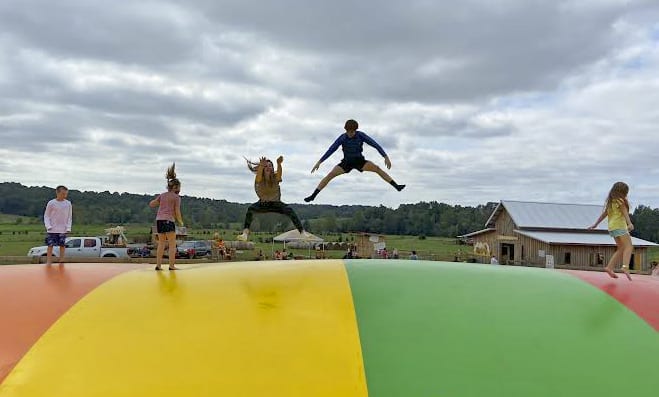 Exploring the great state of Arkansas has been in my blood since I was a young girl. I can remember my dad loading my mom, little sister and me up in our “Leisure Van” on any given weekend to see what we could find.

My dad took advantage of our free time to explore places like Dogpatch, Dinosaur World, creeks, lakes and everything in between, and those adventures stayed with me as an adult.

Taking my kids on excursions has been one of my favorite things to do as an adult and being able to find places off the beaten path will never be tiring.

Last weekend, I loaded my kids up in our version of the “Leisure Van” in the guise of a Dodge Journey and found Jackson Farm on the outskirts of Black Rock.

Driving down highway 117, we were met with three large hay bales painted like pumpkins and a large slide overlooking the entire farm, the only choice we had was to pull in.

After finding a parking spot with the help of the Lawrence County Sheriff and volunteer for the day, we made our way to the gate only to be met with more hospitality as we opted to get armbands for the day.

As we made our way through the entrance, my six year old went running toward the chicken coop to feed, chase and cuddle as many chickens as she could get her hands on while my teenage daughter began taking selfies in front of the fall themed gateway to the farm.

After chickens were cuddled and selfies were taken, the girls ran as fast as they could to the biggest jumping pillow I have ever seen before taking a small break to grab a snack from one of the many food truck vendors easily stationed around the farm.

While enjoying our BBQ and lemonade, the three of us watched kids play in the big sand-pile, catapult pumpkins at old cars and enjoy pony rides before we tackled the huge Candy-land Corn Maze.

Overlooking the luscious lake on the property, sits a huge corn maze that one can easily get lost inside, but made for thirty minutes of hilarity as we played a great game of hide and seek.

Walking back from the corn maze, you are able to see the entirety of the farm and all that it has to offer, making one afternoon hard to fit all of the activities in easily.

Of course, while looking up at the farm, it’s hard to miss the 90′ hay slide with screaming kids flying down it on their flannel blankets begging to “go one more time mom!”

Listening to the live music playing throughout the farm and watching the chainsaw artists create everything from custom sea turtles to made on the spot one of a kind pieces, it’s hard to drag yourself away from such a mesmerizing piece of country.

Before we left, we had to make a stop by the cow train in order to ride through the area one last time. My youngest chose her cow car that was named Gertrude, while other kiddos picked names like Cupcake, Daisy, Buttercup, Clara Bell and Samson.

September 26 was opening day, and the farm offered live music, clogging performances, a sunflower photo shoot and chainsaw artists along with all of their normal weekend activities.  From now until November 1st, each Saturday from 10 a.m. to 7 p.m. and Sunday noon to 7 p.m., the farm will host an array of festivities  – they even have a grand firework finale scheduled on Halloween night.

“I know a lot of families are tired of being cooped up, and this is a great way to get out and have fun without too much worry,” said Bill Jackson, owner. Social distancing is not a problem on the farm as each activity is spaced out and the Jacksons are following CDC guidelines in order to ensure everyone’s safety.

General admission is $13 ages 3 and over, $18 for an armband, $10 for senior citizens and Military gets in free with ID.  For a full list of each weekend’s activities on the farm, check out the farm’s website at www.thejacksonfarm.com or find the Jackson Farm page on FaceBook.