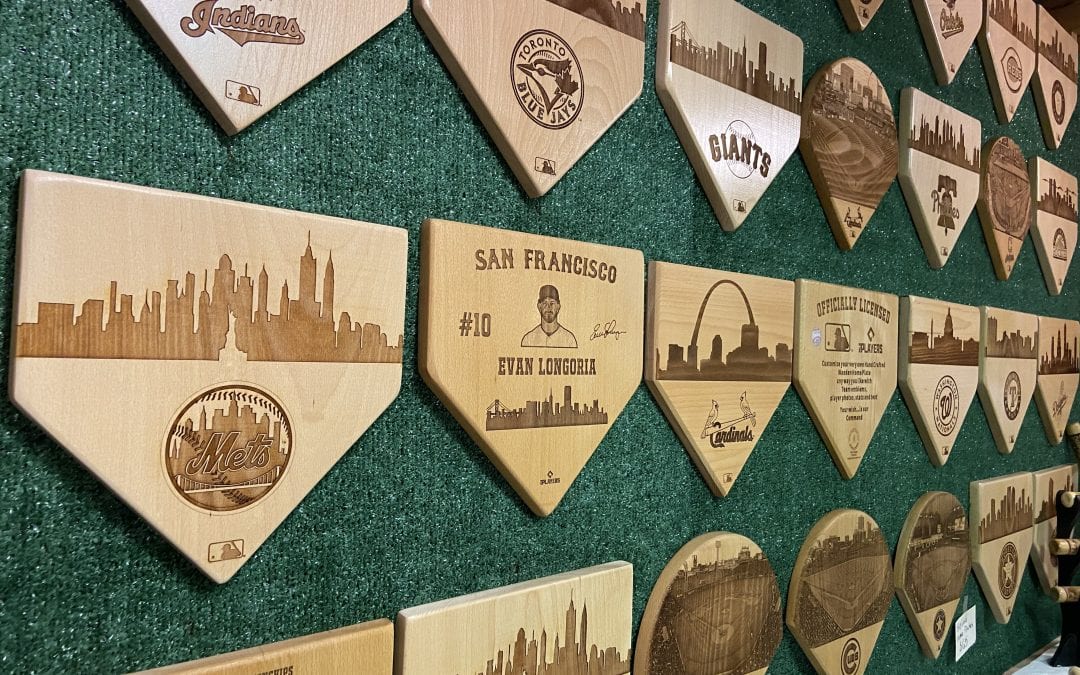 It’s hard to not smile as you cross over the Spring River into the small, unique town of Hardy. It gives you an immediate sense of hometown with an eclectic atmosphere all around. It feels like a smaller version of one of my favorite places in Arkansas, Eureka Springs.

Just as Eureka is known for its vibrant downtown and colorful history of hauntings, Hardy has its own vibrant history surrounding artists and creativity.

Located in the center of Hardy’s downtown area is the Ozark Classic Crafts Mall, an arts and crafts mainstay thats been in the area for over 38 years.

According to the mall’s current owner Marc Herring, it’s always been a place for artisans to display their works. With over 60 different artists lending their dreams and visions to Herring’s designated space for arts and crafts, the mall is a one stop for just about anyone looking for unique items. 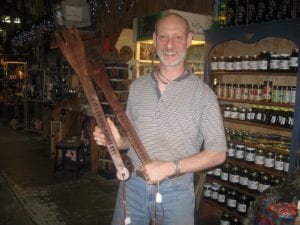 From handmade wooden bowls to wind chimes and personalized items, the mall literally has something for everyone.

Herring can create just about everything, just in time for Father’s day.

Herring took over ownership of the mall 15 years ago, and has still managed to be the main person who creates trophies for the school districts, serves on the board for the Chamber of Commerce and is active in helping the community move forward. Most importantly, Herring is also an artisan and has used this past year to create, maintain and help his business thrive in an uncertain time.

Herring, along with other business owners in the Hardy area were hit hard last spring with the global pandemic. Not knowing what to do, and not knowing the term “slow down”, Herring applied and was granted a small loan and hoped to keep the doors open a little longer with that.

Herring decided to apply for a small business loan and was approved for almost $50,000 making the rest of the year a breeze for him to be able to stay open .

Herring is no stranger to work, and has been creating personalized laser cut and etched gifts like trophies, signs, ornaments, cutting boards and more for years.

Herring took his woodworking skills to a new level when in 2016, a man names Donald Trump became the President of the United States and the Cubs won the World Series. 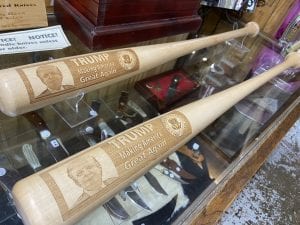 Herring decided to create a line of engraved memorabilia bats featuring Donald Trump and before long a man by the name of Jared contacted Herring with a deal he couldn’t refuse.

With Jared’s help and some detailed social media marketing through Facebook ads, Herring had his first order placed with 100 bats sold in three days. Needless to say, half a year later, Herring had laser engraved Trump’s face 15,000 times!

There was no doubt that the Trump bats were a hit, so now what?

Well, we all have heard the story of “a friend of a friend told me”… in this case a friend of a man who had purchased a bat stated that it was the best piece of personalized memorabilia he had ever seen, and from there, Herring’s life changed quite drastically.

This friend not only loved the bat, but he also held some licensing for Major League Baseball and this person was ready to create even more with Herring.

As Herring stated, “If you want to play ball, you gotta stand on home plate, and you can’t play ball without a home plate.”

Herring began making home plate boards from scratch in his shop and then engraving them for this new endeavor.

He is able to engrave any player, any quote and anything a person would want on the home plate. These items are truly one of a kind and not only would make the best gifts, but they really mean something to each individual.

Touch of Modern, an online up scale business, ran Herring’s home plates exclusively and Herring’s dream of being licensed and creating was well on its way.

Herring has been working non stop and took some time at the beginning of the new year to stop and catch up before his next big project begins.

So, if I were you, I would watch what this little store in downtown Hardy has up their sleeves for the future.

The Ozark Crafts Mall is locally owned and can be found at 116 E. Main in Hardy and can be reached by calling 870-856-2892. For more information about the Hardy area visit https://www.sracc.org. 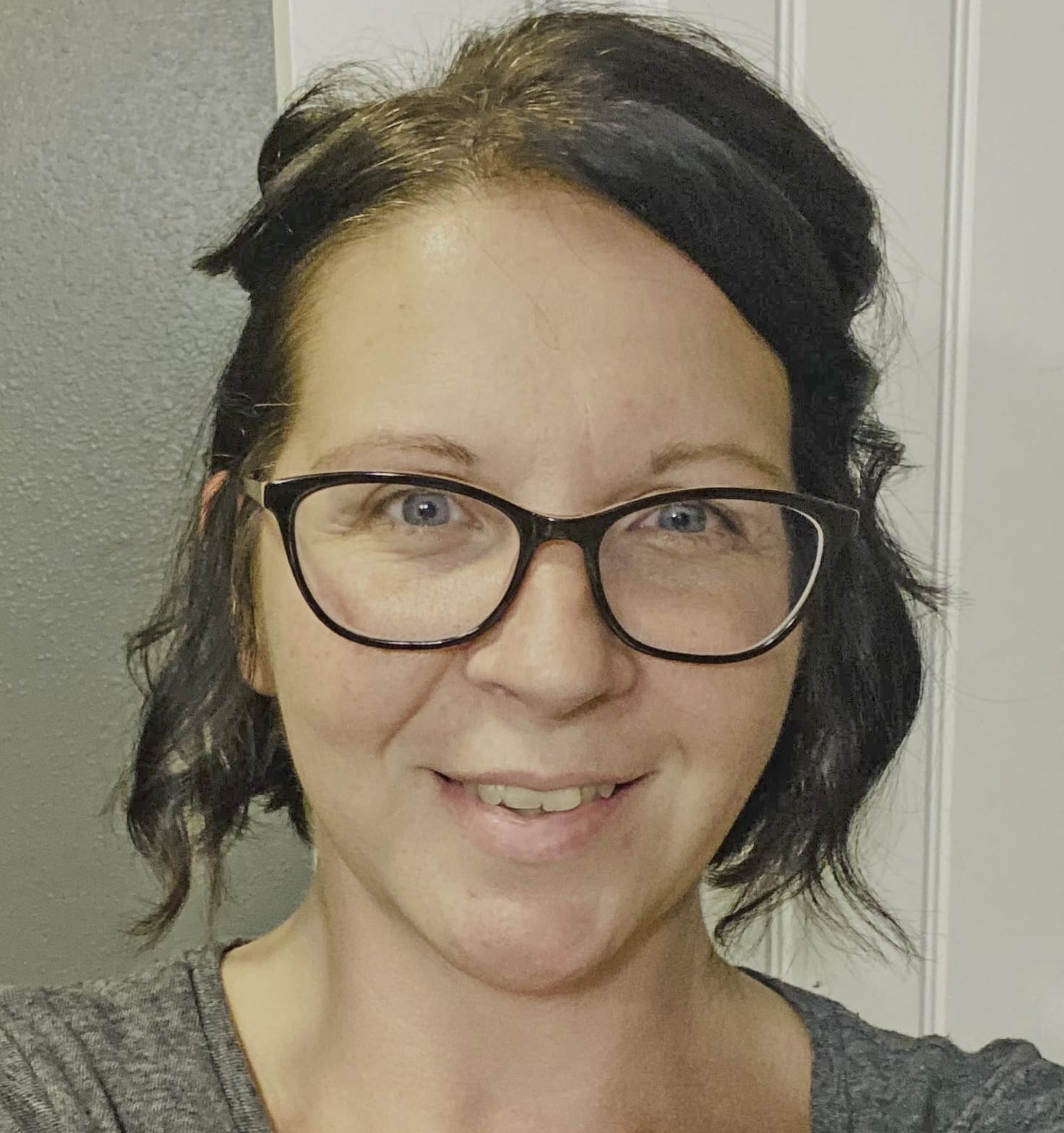 Karin Huffman is an Independence County native who graduated from Cushman High School in 1996. Traveling throughout the state is one of her passions, along with writing about her adventures.

Taking over as travel writer for the Ozark Gateway Region is a dream come true for Huffman who lives in the region with her husband Nathan, two daughters, Grace and Stella and son Kaden.

As a family, they enjoy canoeing the Poke Bayou, Salado Creek and the many waterways along the White River in Independence County. Camping and hiking throughout the region is a must for them in the spring and fall as well.

Huffman is an avid nature photographer who will do just about anything to find the perfect waterfall shot, and has visited many in the great state. From Twin Falls and the Richland Creek area in Northwest Arkansas to little known places off the beaten path, waterfalls will be found.

Huffman has been a travel writer for the Eye on Independence Magazine as well as a staff writer for the Batesville Guard, and is looking forward to devoting her time to traveling throughout the eight county region that the Ozark Gateway offers.