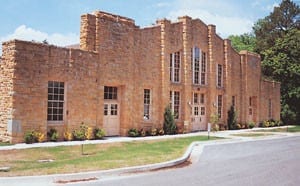 Folks who remember local baseball games in days gone by will want to go to Old Independence Regional Museum at 2 p.m. on Sunday, November 19. Dr. Brooks Blevins will be speaking about those games in a program titled “Hardball in the Hills: Stories of Baseball and Ozarkers.” He will chronicle town teams, minor leagues, and famous and colorful players who made it to the big leagues.

Blevins is the Noel Boyd Professor of Ozark Studies at Missouri State University in Springfield, Missouri. He is the premier historian of the Ozarks and Ozark Culture. Blevins earned his bachelor’s degree from Arkansas College (now Lyon College). Since that time he has authored or edited seven books, including Ghost of the Ozarks, Hill Folks, Arkansas/Arkansaw, and the History of Lyon College. His next book, The Old Ozarks, is coming out next summer.

This museum program about sports is the 11th one presented in 2017 at Old Independence Regional Museum. The focus on sports was planned to introduce the coming to the Smithsonian Institution’s traveling exhibit “Hometown Teams: How Sports Shape America,” which will open in the museum on December 16th

Exhibit curator Twyla Wright said that presently in the museum is a detailed diorama of a 1950s community ball diamond and exhibit panels that tell about early baseball teams. One states that Charles and Chaney Taylor, later Batesville physicians, played in their youth on both Cave City and Batesville ball teams. A couple of early ball diamonds were located in Batesville near where the White River Medical Center is now, and another one at Daffin Field, just east of present Krogers.

Wright stated, ”Voughn Wilson of Bethesda told me that in the 1930s their men’s team played every Saturday afternoon at Cushman, Bell Grove, Webber Chapel and other nearby places.”

This program is offered as part of the museum’s year-long emphasis on sports in preparation for the Smithsonian Institution’s traveling exhibit “Hometown Teams: How Sports Shape America” installation. The museum will have its grand opening of this large exhibit on December 16.

The program will be free and open to the public.  Normal museum hours are: Tuesday-Saturday, 9 a.m. to 5 p.m.  Admission is $3.00 for adults, $2.00 for seniors and $1.00 for children.  The museum is located at 380 South 9th street, between Boswell and Vine Streets in Batesville.