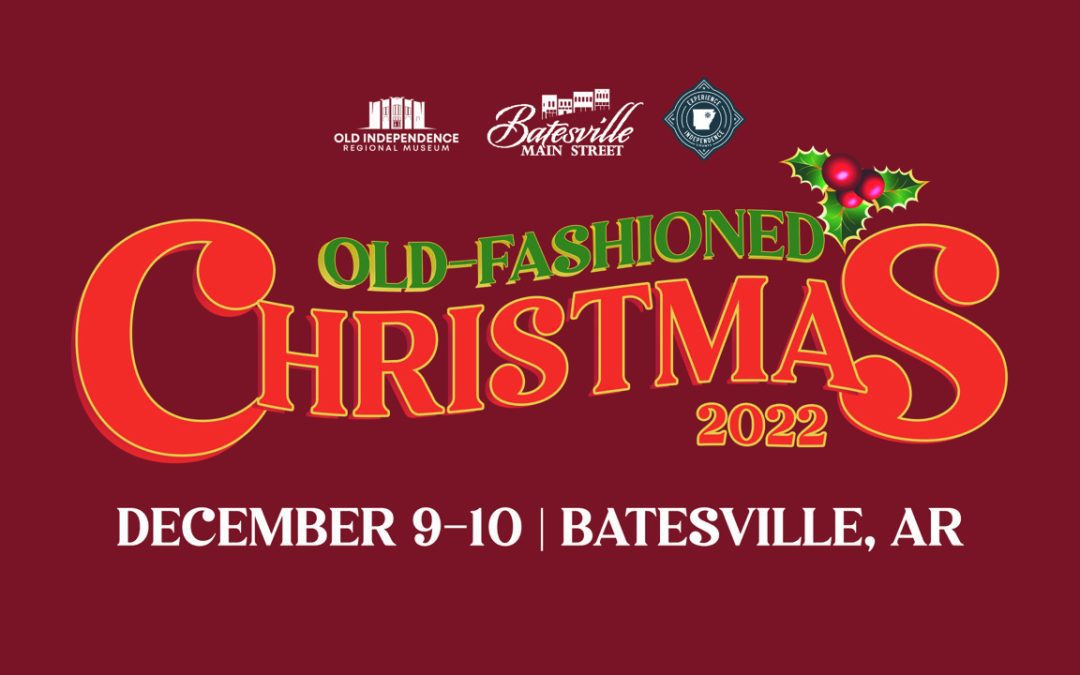 Christmas Festival Planned for Downtown Batesville
Thursday, November 17, 2022, Batesville, Ark. — Main Street Batesville (MSB), along with Experience Independence and Old Independence Regional Museum (OIRM), will present Old-Fashioned Christmas 2022 Friday, December 9 through Saturday, December 10. Festivities will celebrate the holiday season with vendors, a parade, live entertainment, food trucks, and more along Main Street, OIRM, and radiating into Maxfield Park. Old-Fashioned Christmas will feature live music each night which will include Randy & Stephanie Wade and The Sparrows on Friday evening starting at 6:00 p.m. On Saturday, the stage will be filled with local groups, choirs, and even karaoke after the Annual Kiwanis’ Christmas Parade. MSB also encourages everyone to visit the downtown merchants and take advantage of shopping promotions.
New this year, OIRM will be hosting a Quilt Walk from 11am-2pm. The Quilt Walk will begin at the museum and extend into storefronts downtown. The museum will also be hosting crafts, entertainment, and a Winter Market. The Winter Market will highlight artisans who specialize in a trade from days past. The feature will also include demonstrations of quilling, dulcimer playing, leather work, and more. OIRM will also have craft stations at the museum located at 380 South 9th Street.
The Annual Kiwanis’ Christmas Parade will light up Main Street at 6:00 p.m. on Saturday, December 10. The parade route will include all of Main Street Batesville. The parade theme for 2022 is “A Storybook Christmas”.
To view the full schedule of events, visit mainstreetbatesville.org. Old-Fashioned Christmas 2022 is sponsored by Bad Boy Mowers, Citizens Bank, Lyon College, First Community Bank, and Imaginations Events.

Cathy Drew is a lifelong resident of the region that she loves to promote. She was born in downtown Batesville in the late ’60s, located in one of the eight counties she now enjoys encouraging people to visit.

After Drew became director, she took the region to the next level by helping the tourism organization create a new website and moved it from the old newspaper paper tabloid publication to a color magazine format. She helped open a visitor center for the Ozark Gateway, allowing visitors to pick up information from the entire state 24/7. Over the years, Drew has helped the organization meet new marketing goals, such as in- and out-of-state marketing, assuring that all 100,000 copies of their magazines are distributed each year.

In 2016, she assisted in creating the first Ozark Gateway Region Golf Classic. The tournament continues to grow each year, allowing the organization to expand its co-op program and helping each county have dedicated promotion. Drew stays busy at Ozark Gateway as the ad sales manager, magazine editor, day-to-day office operations, trade show representative, and magazine distribution representative, all while ensuring that the region is represented all over Arkansas and southern Missouri.

Drew was featured in several local and statewide publications over the years, as well as the 1997 cover of the Ozark Gateway Region tabloid, along with her then 4-year-old son, Jon. She has received several awards, such as the Batesville Rotarian of the Year in 2010 and a three-time Paul Harris Fellow.

She also has served as an Independence County election commissioner for several years. She now serves as their co-election coordinator, helping with behind-the-scenes management of voting equipment, day-to-day election deadlines, and poll worker training.

Drew serves on the Arkansas Travel Council Board of Directors, is Batesville Rotary Club Past President, and is the Rotary Clubs’ current publicity chair.