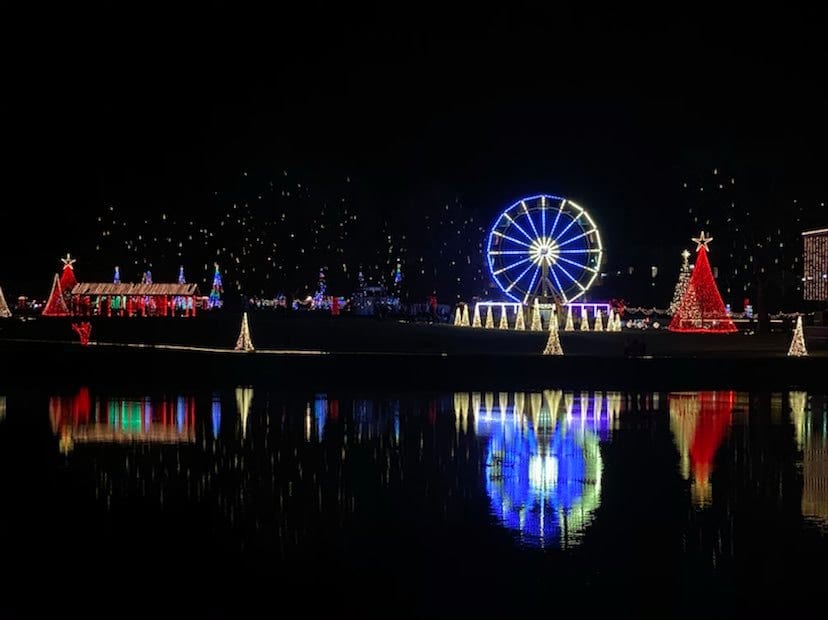 November 5, 2021 (Batesville, AR) — Each winter, the light display that earned Batesville recognition as the Christmas Capital of Arkansas™ takes over Riverside Park for locals and visitors to experience a magical holiday season on the White River.

The City of Batesville and the Batesville Area Chamber jointly announced that the White River Wonderland will be opening its 2021 display on Wednesday, November 24, at 5 p.m. The lights display will be on daily from 5 p.m. to midnight. The final chance to see the Lights will be on Sunday, January 2, 2022.

The show features millions of lights and welcomes thousands of visitors each year. Admission to White River Wonderland is free; donations are accepted.

Visitors, again, will have numerous options for viewing the lights.

“You can walk through, or you can drive through the display, or you can catch a horse-drawn carriage, train, or Ferris wheel ride. That’s what makes us different,” said Johnathan Abbott, City of Batesville Landscape Supervisor. “Most of the other displays in the state are either drive-thru or walk-thru, and we are a little bit of everything.”

Watch the show from the warmth of your car as you listen to your favorite Christmas tunes on White River Wonderland’s radio station. The entire display is also walkable, with illuminated sidewalks and walking trails. A fully-lit walking trail leads visitors to the light show from the overflow parking lot at the Batesville Community Center.

Visitors may also take a ride through the display in one of the White River Wonderland’s horse-drawn carriages. Carriage rides will run from November 26 through December 30, except December 25. Carriage rides are $8 per person ages two and up.

The custom-built White River Express will make its return this year. Train rides will run from November 26 through December 30, except December 25. Train rides are $5 per person ages two and up.

And for the first time, Santa Claus will make the trip to the Christmas Capital of Arkansas™ for the White River Wonderland lights display. Each weekend, visitors will be able to take Selfies with Santa. Visitors will get to spend 3 minutes with Santa for $1.

“We think this year is going to be the best lights display yet,” continued Abbott. “We think families will build life-long memories with a trip to Batesville’s White River Wonderland.”

Learn more about the Christmas Capital of Arkansas™ at whiteriverwonderland.com or on the White River Wonderland Facebook page.