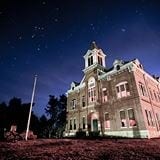 (POWHATAN, Ark.) – Ghostwalks, scheduled for October 16, 2021, at Powhatan Historic State Park, has been revamped this year due to the ongoing pandemic.

Park Interpreter Geoffrey Havens noted, “The event typically sees between 400 and 800 attendees each year who crowd into small historic structures to hear our storytellers spin spooky folk tales from Powhatan’s history. To put the safety of our guests and staff first, we’re putting a socially distant ‘twist’ on the event.”

Instead of the usual storytelling event, Powhatan will host a limited number of reservations–only, lantern-lit townsite tours at 6 p.m. and 8 p.m. onOctober 16.  Powhatan’s spooky past will still be well represented on the guided walk, with participants experiencing things such as being locked up in the jail.

Established in 1970, Powhatan Historic State Park protects six historic structures along the Black River in Northeast Arkansas that were an important 19th century center of commerce and county seat. The buildings, geography, and artifacts that the park preserves help visitors bridge the past to the present.

Highlights of this day-use park include the six historic structures, all in their original locations, a visitor center in the 1888 Courthouse with exhibits about the park’s historic resources, and easy access to the Northeast Arkansas Regional Archive for those interested in historic research. Interpretive tours, programs, and workshops are offered throughout the year. The park also has a boat ramp for access to the Black River.

The state parks have 1,800 campsites, 1,050 picnic sites, 208 cabins, five lodges, and 415 miles of trails. Eight million visitors annually come from all regions of the country. Park staffs provide over 42,000 education programs, activities, and special events to more than 700,000 participants each year.

Established in 1923, Arkansas State Parks preserve special places for future generations, provide quality recreation and education opportunities, enhance the state’s economy through tourism, and provide leadership in resource conservation. Connect with us on Facebook, Instagram, Twitter, and visit ArkansasStateParks.com and ArkansasStateParks.com/media to learn more about everything we have to offer.