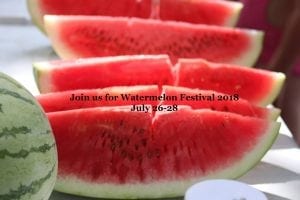 The Cave City Watermelon Festival has announced its 2018 entertainment headliners. This year’s lineup includes three internationally touring, headlining artists, with one performing each night of the festivities.

Thursday, July 26th will be headlined by the Southern Gospel sounds of the LeFevre Quartet. When you think of Gospel Music, the LeFevre name is one that has always been at the top. In 1921, the original LeFevre Trio began traveling and singing across the country; quickly setting the standard for quality and professionalism in what would become known as Southern Gospel Music. For decades, the LeFevres blazed new trails in with their award winning music, turning out songs and singers that would become legends in the field. 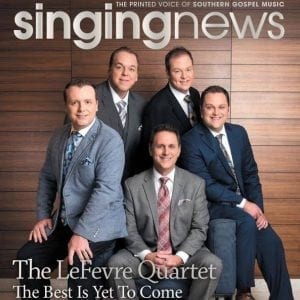 In the late 1970’s, some thought the LeFevre name would be retired when the trio came off the road, but on the contrary, the LeFevre name has grown stronger than ever. Within just one year of formation, Gospel Music fans voted the LeFevre Quartet the 2006 Singing News Fan Awards Horizon Group of The Year. In 2007, the group was voted “Breakout Artist of The Year” in the SGN Awards and in 2009, their song, “Big Mighty God” was nominated for a Dove Award.  In the past two years, the LeFevre Quartet was nominated as a Top 10 Traditional Quartet in the Singing News Magazine’s Fan Awards. With stellar vocals, high energy performances, and a heart for ministry, this combination of talent is one you won’t want to miss.

Mo Pitney from Nashville, TN will headline Friday night’s entertainment. Mo began playing the drums at 6 and guitar at 12. He played in a bluegrass band with his brother and a friend, then moved to Nashville, where he later signed a record deal with Curb Records.  Pitney released his first single “Country,” in 2014. Billy Dukes of Taste of Country says, “Mo isn’t making a statement, and he’s not the sign of some traditional country revolution. But he’s a reminder of how good a simple country song sung by a man who believes in God and George Strait can feel.”  Pitney’s debut album, Behind This Guitar, was released in 2016. It charted at No. 10 on Billboard’s Top Country Albums in its first week. Recently, he appeared as a guest artist on the Grand Ole Opry stage as one of the newest acts in Country music. He can also frequently be found playing at the Bluebird Café in Nashville.

Saturday night, one of the most popular country bands of the early ‘90s will take the stage to round out the three day event. Fans will recognize Little Texas #1 hits such as God Blessed Texas and What Might Have Been. The band was influenced by the musical stylings of modern country groups like Alabama and Restless Heart, along with country rock groups like the Eagles. Since their debut album in 1992, Little Texas has sold over 7 million albums, earned 3 Grammy nominations, won a CMA Album of the Year award, and an Academy of Country Music award for Vocal Group of the Year.  The group has had 15 songs on the Top-10 hits list such as Some Guys Have All the Love and First Time for Everything. The group’s album First Time for Everything had five singles making it to the top of the charts. The second album, Big Time, truly was the big time for Little Texas, selling nearly three million copies, gaining the group three No. 1 singles -“What Might Have Been,” “God Blessed Texas” and “My Love.”  Taking a much needed break from their relentless touring schedule, the group disbanded in 1997 and reunited in 2004. According to the band’s website, the musicianship has only improved with age with Porter Howell truly coming into his own as the band’s lead vocalist in addition to his lead guitar work, and backed by the always solid playing of drummer Del Gray. “The four of us appreciate each other and still have a ball on stage,” says drummer Gray of the band’s chemistry on stage after all this time. “There is a comfort level that happens to us when we play together that can only happen with 20-something years of experience.”

In 2017, the Cave City Watermelon Festival earned bragging rights as the event brought home the inaugural Department of Arkansas Heritage’s Food Hall of Fame, Food Event of the year, and earned a spot as a finalist in the Arkansas Parks and Tourisms Henry Awards in the Grand Old Classic Event category. This year, the festival has been notified that the event is a finalist for one or more award categories of the ALFiEs, and will attend the awards luncheon on February 8 th , presented by the Arkansas Festivals and Events Association.

Admission to the three day festival is free thanks to the generosity of the event sponsors, and includes the live entertainment at the Cave City Park. Artisans, food and craft vendors, and kid’s activities will be set up around the park. Mark your calendars for the 39th Annual Cave City Watermelon Festival.”

About the Cave City Watermelon Festival:

Celebrate the sweet life at the 39th Annual Cave City Watermelon Festival. The festival will take place July 26th-28th, 2018. After its debut in 1980, the Watermelon Festival has evolved into a summer celebration, bringing Grammy winning artists, emerging talent and local favorites along with thousands of people from Cave City, the surrounding area and around the United States together each year for free entertainment and an unforgettable homecoming experience like no other. During the festival, the spotlight will shine on 11 artists, great food, family friendly activities, and of course, the World’s Sweetest
Watermelons. For more details, please call 870-283-5301, visit www.cavecitywatermelonfestival.com, Facebook.com/cavecitywatermelonfestival or
Twitter: @CCMelonFest.